I had the pleasure of chatting with Akeil, the man behind Queer Bruk to discuss his merch, journey, inspirations and the future of Queer Bruk events.

What is Queer Bruk and what do you do?

What is the vibe of your Queer Bruk night?

Sexy and sexuality. A lot of queer nights have a male focus, as a lot of gay men go out to get laid. Queer Bruk, you go out to dance, people go there to have fun. I want people to feel comfortable enough to kiss each other, not kiss each other and to not feel pressured to do things they don’t want to. The night is about freedom – as cheesy as it sounds – feeling free, forgetting there’s an outside and someone out there who is gonna say something about your queerness or quirkiness. Being in this enclosed space where everyone just feels safe. Man, woman, trans, non-binary I just want it to be a comfortable space.

How did you come up with the design for your merch?

I basically wanted to showcase queer black joy and happiness. I commissioned a few artists who were black and/or queer to basically create what they saw that as. 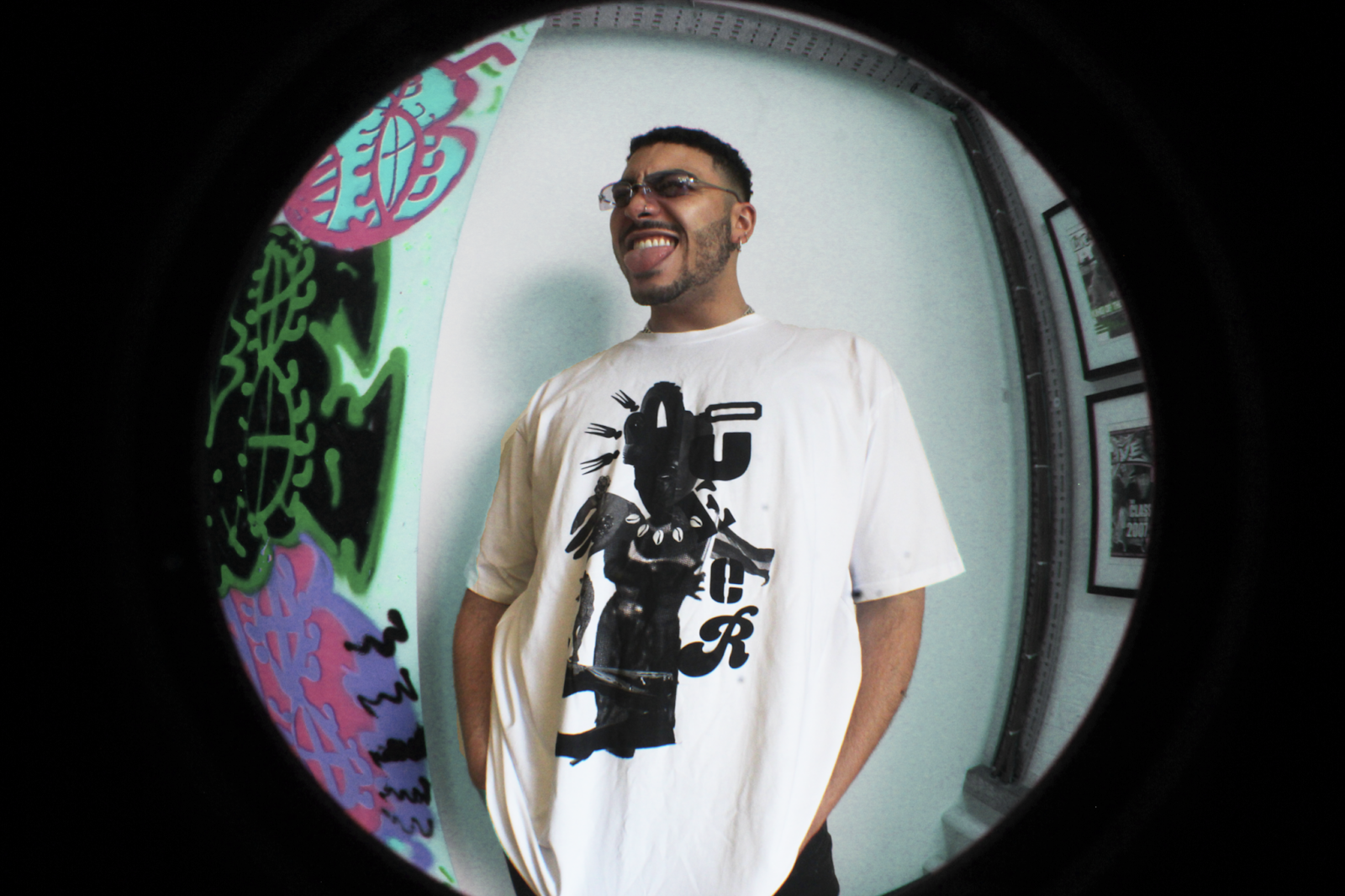 What is your favourite genre of music?

Weirdly enough Queer Bruk is all about dancehall, afrobeats, soca and reggae, my favourite is disco. I literally could dance around in my room to any disco song, I have numerous playlists. I have been wanting to do another club night called On Werk Way, like my second name. A queer black disco night. I’d like to do it themed cause people don’t get to dress up enough I think.

"As a queer man of colour, everyday I'm doing something on an activist level, and why can't we combine that with queer vibes, music, some dirty dancing and some sexy brown boys?"

I've done a pree of Queer Bruk's Insta and seen a really strong link between queerness and Africa, why this angle specifi­­cally?

I have a lot of friends over in Nigeria who are activists and speak on what it’s like to be queer in Africa. Matthew Blaise, an activist, discusses a long history of – I want to say the word “­homose­­xu­­ality” but – male-male love, female-female love and human-human love that were so similar compared to hetero­­nor­­ma­­tivity. Before colonisation it kinda wasn’t a thing, and there’s a lot of people that are now trying to unwrite this wrong and I’m doing my little bit from North London. I wanna have fun, I think activism can be fun, in a way. As a queer man of colour, everyday I’m doing something on an activist level, and why can’t we combine that with queer vibes,­ music, some dirty dancing and some sexy brown boys?

What is your favourite condiment? 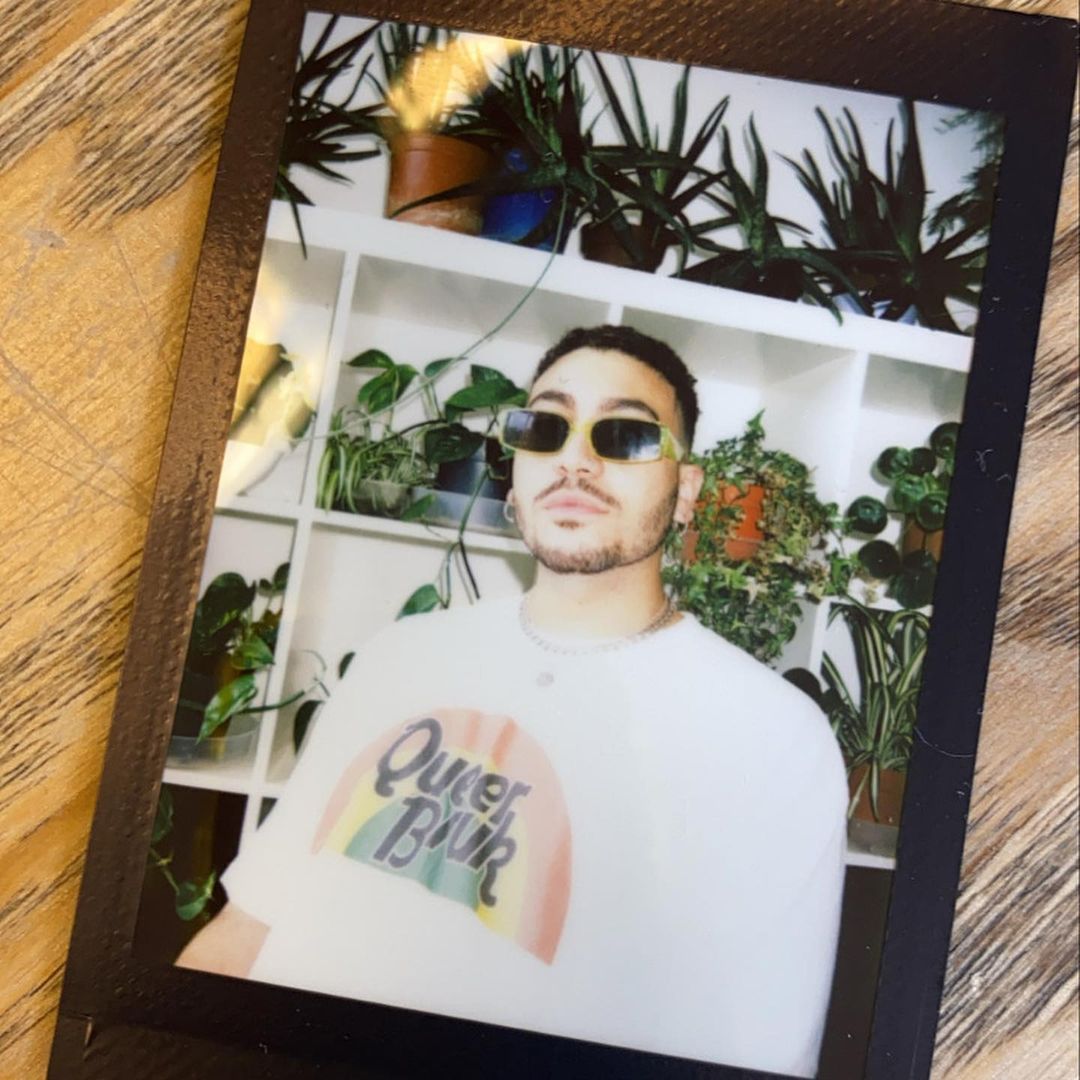 What is your favourite area of London?

I love East because it’s filled with the weirdo gays. That’s what I like. Central, it’s kinda filled with the white – “normal gays”. Gays that like boat shoes. I love all the drag queens, I feel that’s where all the non-binary people come to slay and play, that’s where a lot of queer awakenings for people that aren’t just cookie cutter gay come to life. There’s such a vibe there.

What is your favourite song to hear at a Queer Bruk event?

Needle Eye Pum Pum by Spice. That song will play and I go mental. It has to play at least once, any Spice song. Spice is amazing. I had this issue when I first started Queer Bruk; a lot of dancehall songs are incredibly homophobic and do I just not play those songs? Then I thought, how rebellious is it to see two brown boys making out to some homophobic lyrics, that’s a massive “fuck you” to anyone that’s created those lyrics. But Spice and people like Shenseea are so welcoming of the queer community, so I put their songs on repeat. I wanna give them their money, royalties, whatever because they are so supportive, they are queer icons in a way.

Who is your queer icon?

Prince is probably my number one. As a lightskin, slightly feminine man who has a hairy chest, I literally saw him and was like, how do you exist? And how are you real? Because I‘ve never seen your likes before. He was effeminate, masculine at the same time. and I was just like, oh my god I see myself in you. And he has the music to top it off and also he’s so sexy. And the looks he would serve. 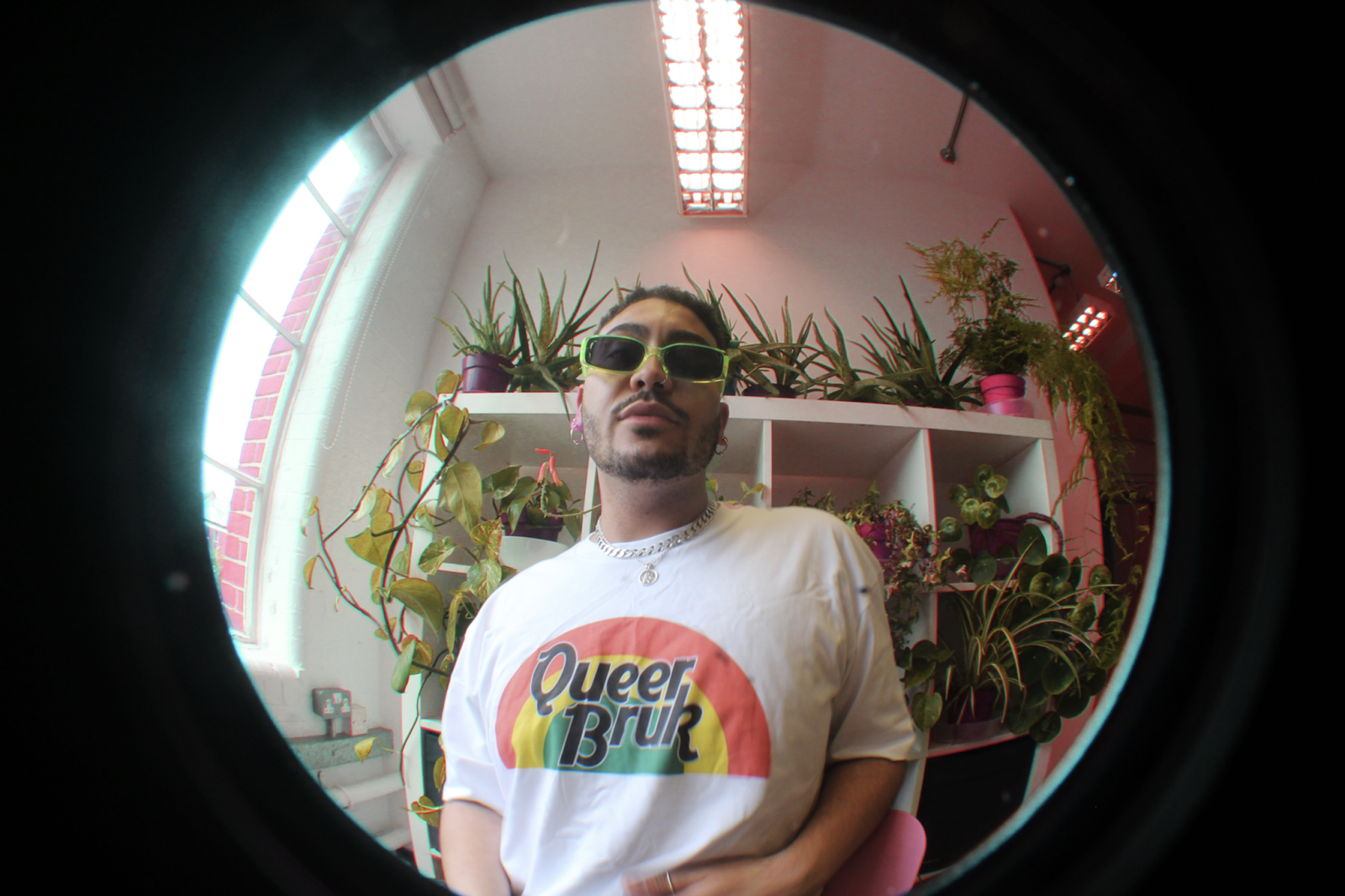 What is your favourite piece of clothing or accessory that literally takes your fit from 0-100?

"I want non-binary people, trans people, older people, younger people, black, all different races to understand this is a space for black queer people, it's about the music that we grew up on, it’s about the culture that we know."

What do you think Queer Bruk provides the community with?

It provides a space for people to meet. You don’t meet a queer person in the library, you can’t instantly know someone is queer. For young kids who are turning 18, don’t have anywhere to go, don’t want to go to the “white gay clubs”, it’s scary going into a space where people are so openly racist or exoticising you. When you’re reduced to this fetish or thing, it’s hard. Our main ethos is around making sure it’s a safe space for everyone, a lot of queer nights and spaces similar to mine cater to men. There’s some lesbian places but nothing for everyone. I want non-binary people, trans people, older people, younger people, black, all different races to understand this is a space for black queer people, it's about the music that we grew up on, it’s about the culture that we know. 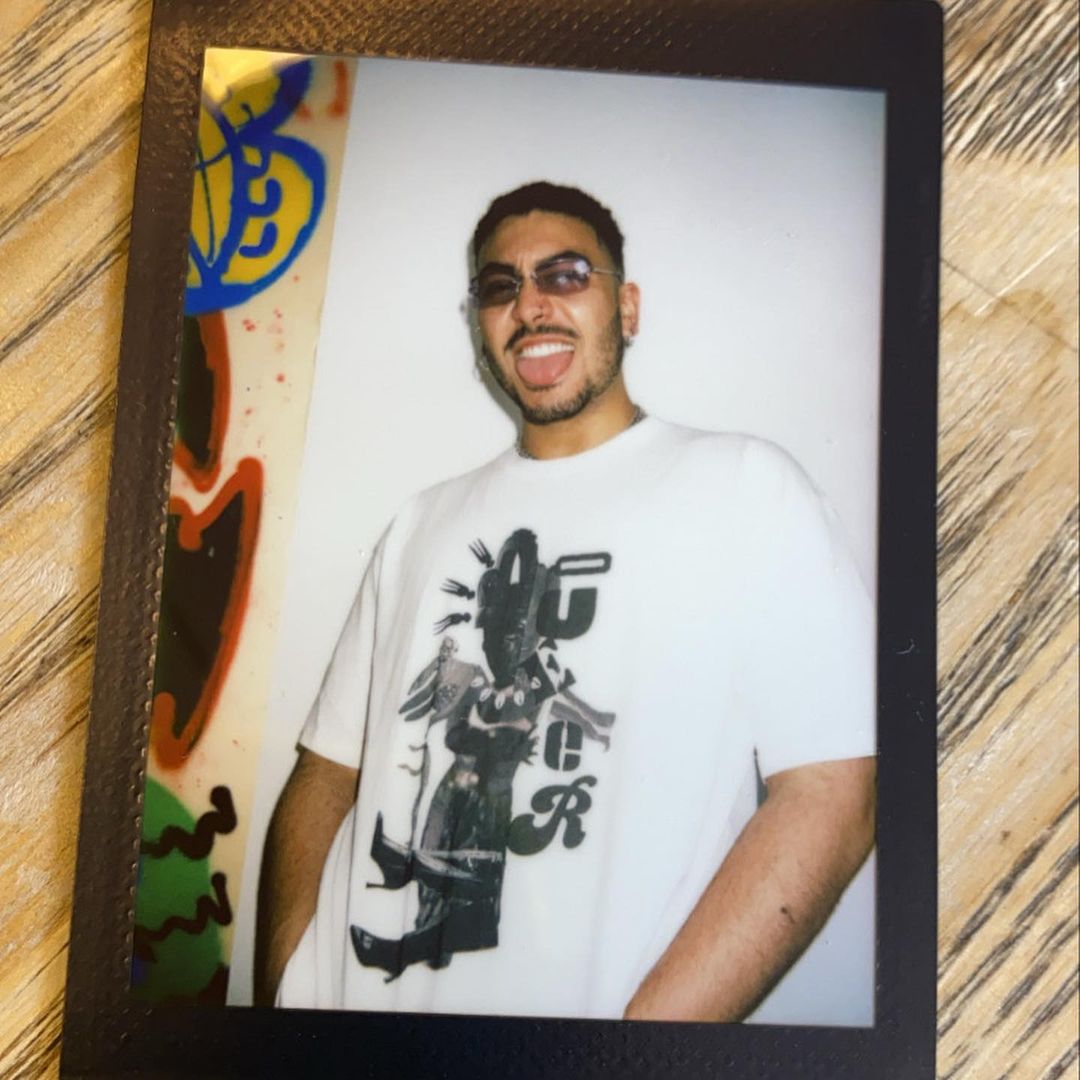 So, where would you like Queer Bruk to move towards?

I want my own festival, QB fest. I want it outside of Pride season, I wanna show that we’re queer and proud everyday. I want to have queer artists in tents performing, I’d like to have alternative music; the black kids who sing rock, the black kids who do screamo, I wanna do all that shit, different tents with different people. A main stage, have Spice perform and I wanna have Missy Elliot as well. That’s the dream.
Big love to Akeil for letting us speak with him and most importantly for trusting us to create the awesome Queer Bruk merch that you can cop here Head over to our Insta to hear more from this wicked interview and make sure to roll through to the next Queer Bruk event
– Rachel & The KH Team
Transcribed by Xae
Photography by Rachel
Posted on 19th August 2021