I had the pleasure of chatting with Sofie K about her watermelon resistance merch she created with us. We got to learn more about her and the people who have inspired her.

How did you get into DJing?

I actually started buying records when I was thirteen, just because my mum gave me her record player and when you’re that age you hate all your parents’ records. So I used to go down to my local shop in South Ealing, and then a few years later my mum was going out with a guy who was a funk DJ and then his partner couldn’t make it – this was when I was 16, in london – so he said “do you wanna come down, do 20 minutes there and there whilst I go to the toilet go out for cigs?” And yeah, here we are. 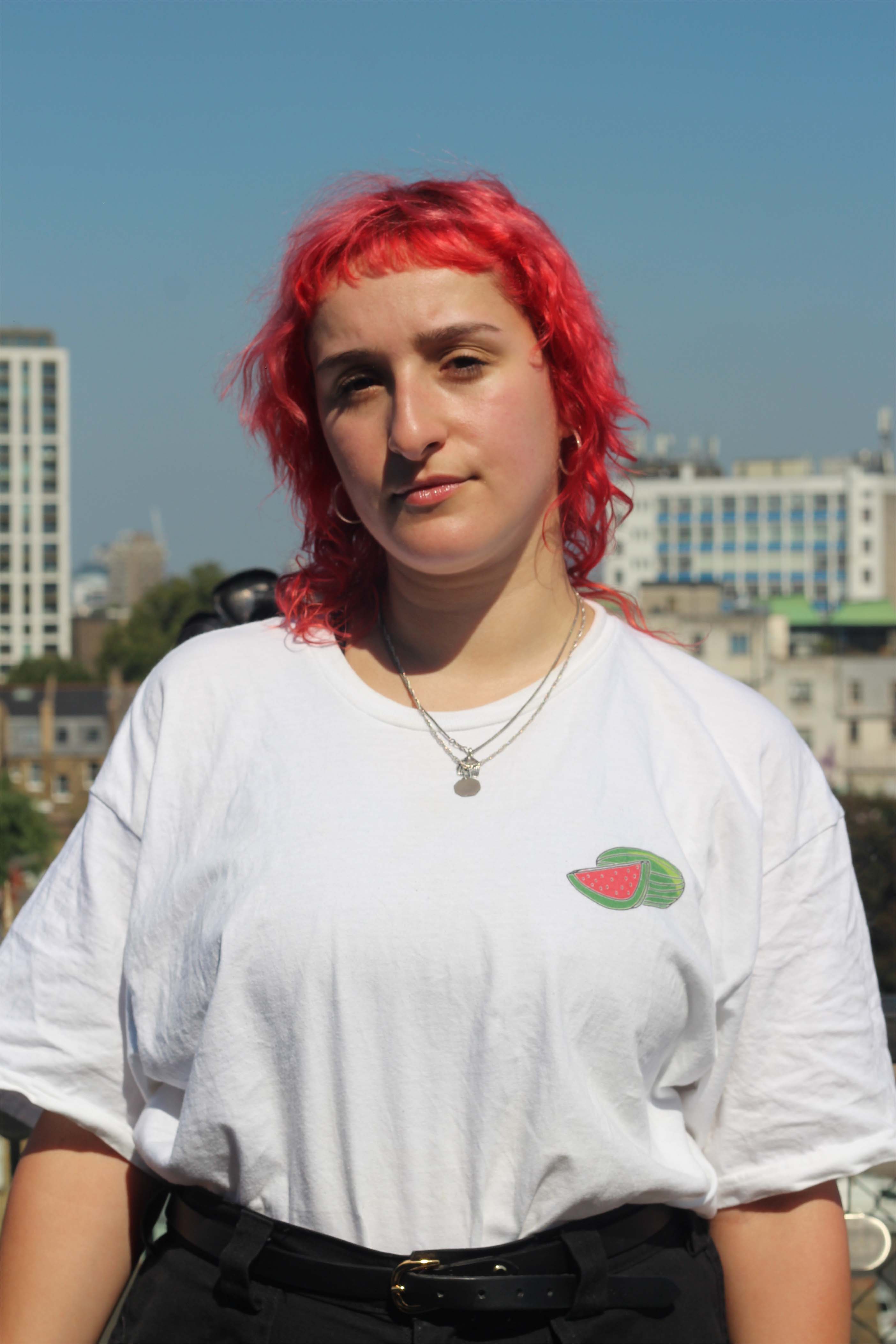 What is the message behind the merch?

The merch is called watermelon resistance and is for Medical Aid for Palestinians, which is an organisation that has offices in Gaza, Lebanon and also in London. They provide medical assistance to Palestinians on the ground and also campaign in the UK to change perceptions about the Palestinian courts because there are lot of misconceptions about it, particularly how it’s spoken about in the wider British society.
The idea behind the design is in 1967 after the Gaza war, it became illegal to wave the Palestinian flag in the occupied territories. Because the Palestinian flag is black, green, white and red people started drawing watermelons as a way to get around the ban and that became a symbol of national resistance. The ban actually stayed in place until 1992 which is pretty crazy and there was even a point in 1980 where it became illegal to have any artwork with any colours from the flag because obviously the watermelon became pretty known. So that was the idea behind it, it was just like a fun watermelon drink and it’s my favourite fruit.

"It was so free, lots of naked bodies around but in a really positive nice way."

One that really sticks out in my mind is when I played at an event called Kiss Me Again, in Manchester. For anyone who doesn’t know, they’re a monthly queer night at Soup Kitchen and they’re just such an instituion, it was so free, lots of naked bodies around but in a really positive nice way. And it was just a big italo special. I played with Frazer from Club Rush in Sheffield, yeah I think that was probably one of the best vibes ever.

What’s your drink on a night out?

It depends, I like a nice spiced rum and coke. I also like an Aperol spritz in the summer. But then also as like a trendy millennial obviously I like IPAs and craft beers. I’m half Polish so I will just drink anything that’s put in front of me, ethanol? 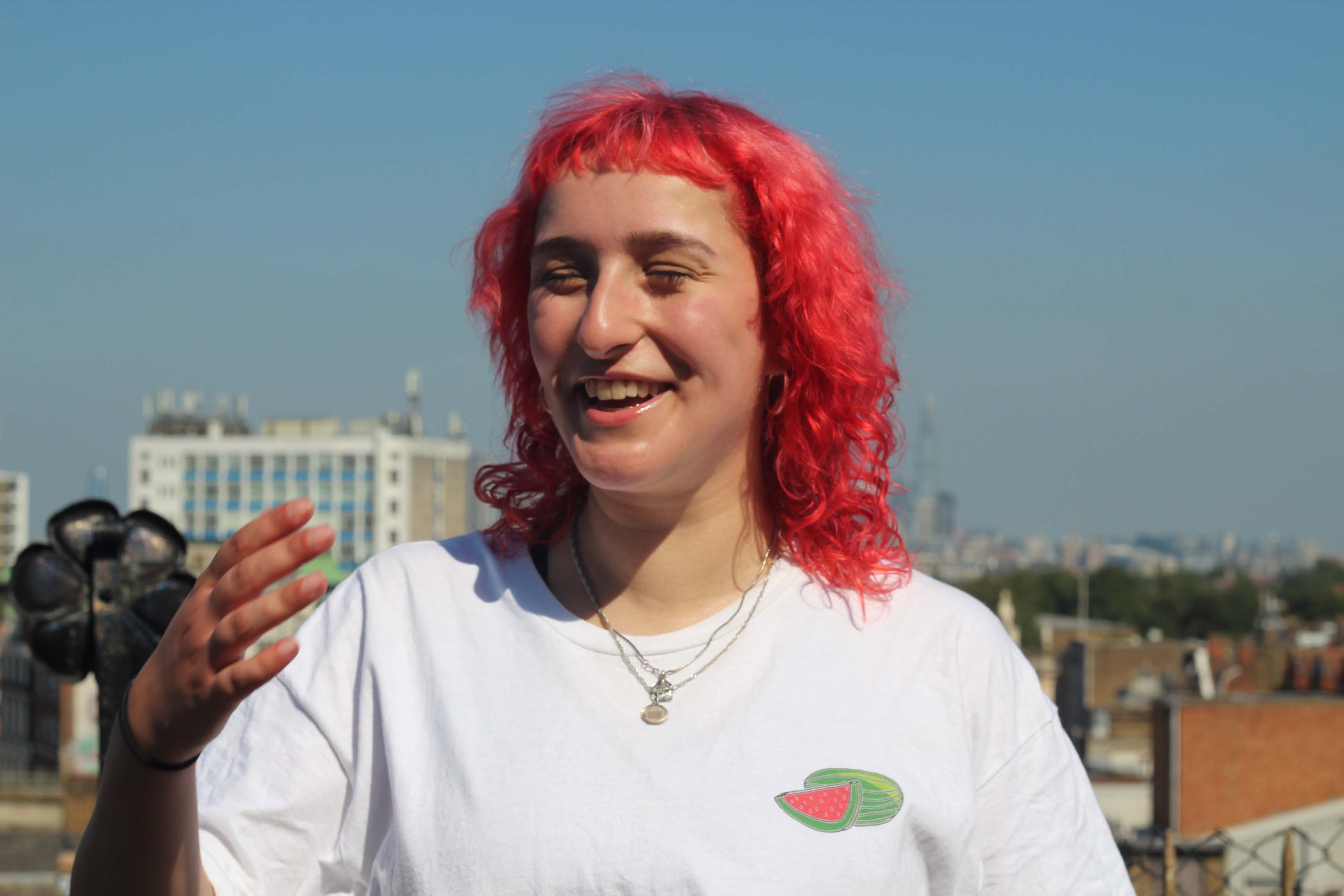 Who is your personal inspiration as a DJ or who would you love to go b2b with?

Personal inspiration, probably people who aren’t really DJs, I think I’m just often quite inspired by general social activists, a lot of people on the left today a lot of writers, like Owen Jones, Novara Media I listen to quite a lot. Moya Lothian McLean who is the political editor at gal-dem she does a lot of amazing pieces and does some really cool podcasts as well. Those are the people who I’m probably most inspired by. But who I’d like to go b2b with, Call super is like my favorite DJ but I don’t think I’d like to go b2b with him because I don’t think I’m that good, in terms of technical skill, I don’t think I could cope with the curveballs. That would be like a dream situation but also the imposter syndrome would be quite crippling. I quite like DJs that play lots of different genres and every time I’ve seen him he’s done that and kind of with purpose I guess, so even though he’s so expansive he’ll play like ten different genres in a set he’ll still keep that flow and keep it not disjointed, that’s just what I love in a DJ. Also Midland does that as well and I’m playing with him in October at White Hotel which I’m really excited for. Those are the sort of DJs I really like who play all sorts but also like fun and upbeat stuff. People who know me know that I’m not a chin stroker, so I appreciate someone who can drip like a Cardi B tech-house edit and still make it slap.

If you were an animal, what animal would you be?

I would be a cat. A lot of my friends say I’m very much like a cat person in the sense that I prefer cats to dogs, sorry controversial opinion. Cats are great, they’re so independent, quite indifferent. I think those are characteristics that I would like to embody if I was less needy. I just think cats are cool and there’s so many different types of cats like domestic cats, big cats, jungle cats but they all have that one unifying thing. 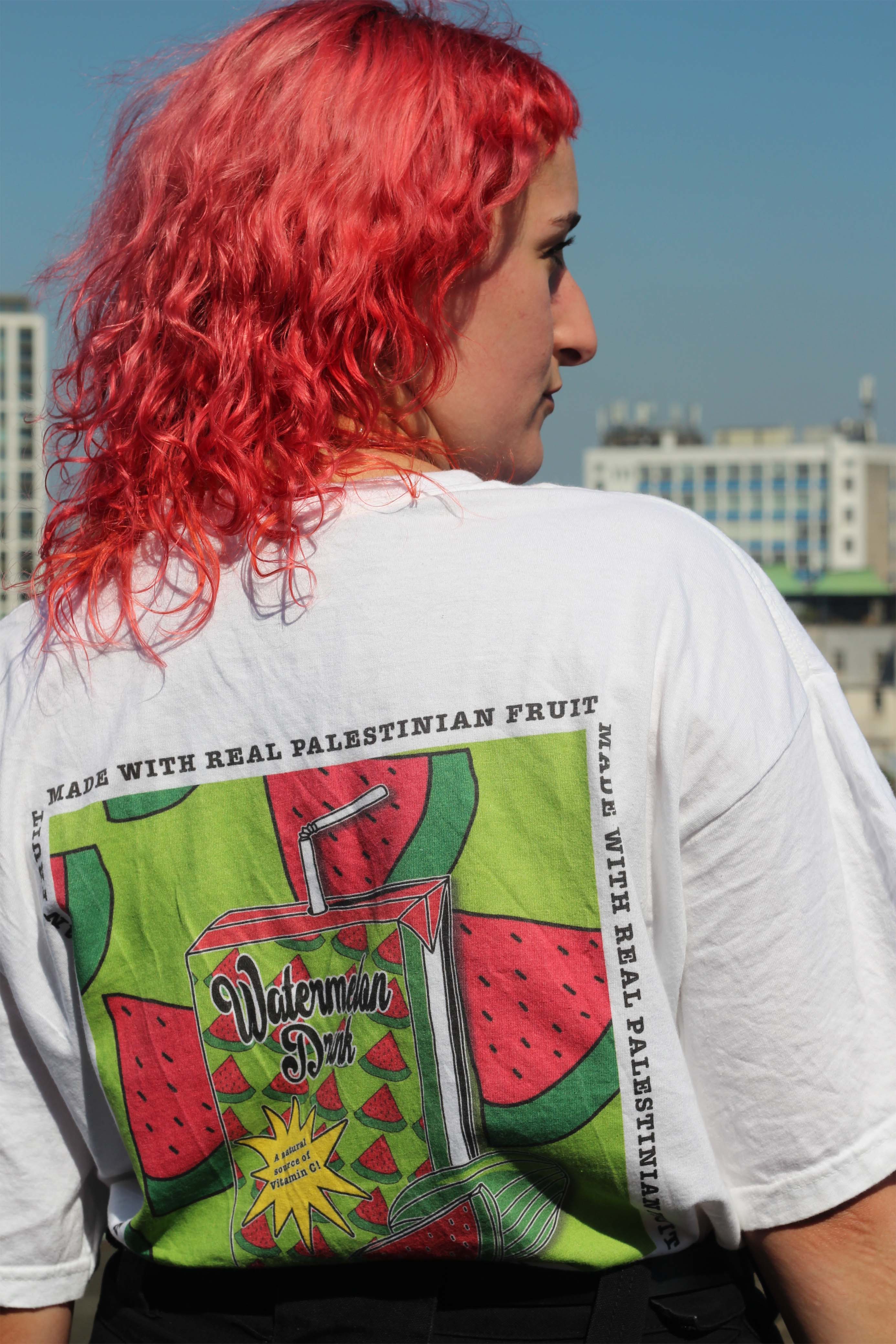 What is the inspiration behind your DJ name?

Oh it’s really obvious, My name’s Sofia and then my middle name is Katya, so it’s just shortened, Sofie K. Because I started DJing when I was 16, you know your imagination isn’t that developed at that age, it was the best thing I could think of and now I can’t be bothered to change it, but I think it rolls off the tongue, you know, it’s snappy, there are lots of K hole jokes you can make about it.

If you could give advice to people trying to get into the music industry what would it be?

Have rich parents. No but, that aside, just try and get as many things for free or discount as possible. When I was learning to beat match, even though I started DJing really young, it wasn’t dance music, it was obscure 60s psychedelia and northern soul. So I didn’t know anything about beat matching. It wasn’t until I went to uni I became friends with a group of guys that ran a radio station from their house, one of them was like, "if you wanna learn you can come here and we can teach you," so on my days off I would go round to practice. I know not everyone has access to that equipment but there are quite a lot of free workshops particularly for people who are women, people of colour, I’d definitely recommend looking in your city. I think Sisu do ones all around the country, All Hands on Deck do some, if you’re in Manchester hit up The Rec. Centre, they’re a great practice space.
I think bar gigs and pub gigs are the best practice you can get as a DJ, especially if you don’t have decks, I couldn’t afford decks til really recently, they are expensive. Go to your local pub, find a bar, it doesn’t have to be cool, even better if it’s not cool. Try and get a regular situation, don’t network in a way that’s really transparent cause that’s fucking gross; be nice, be genuine, take what you can get, don’t be too stush, don’t be above anything, no one’s above anything you know? just be a nice person and listen to loads of music I guess is the main thing really. 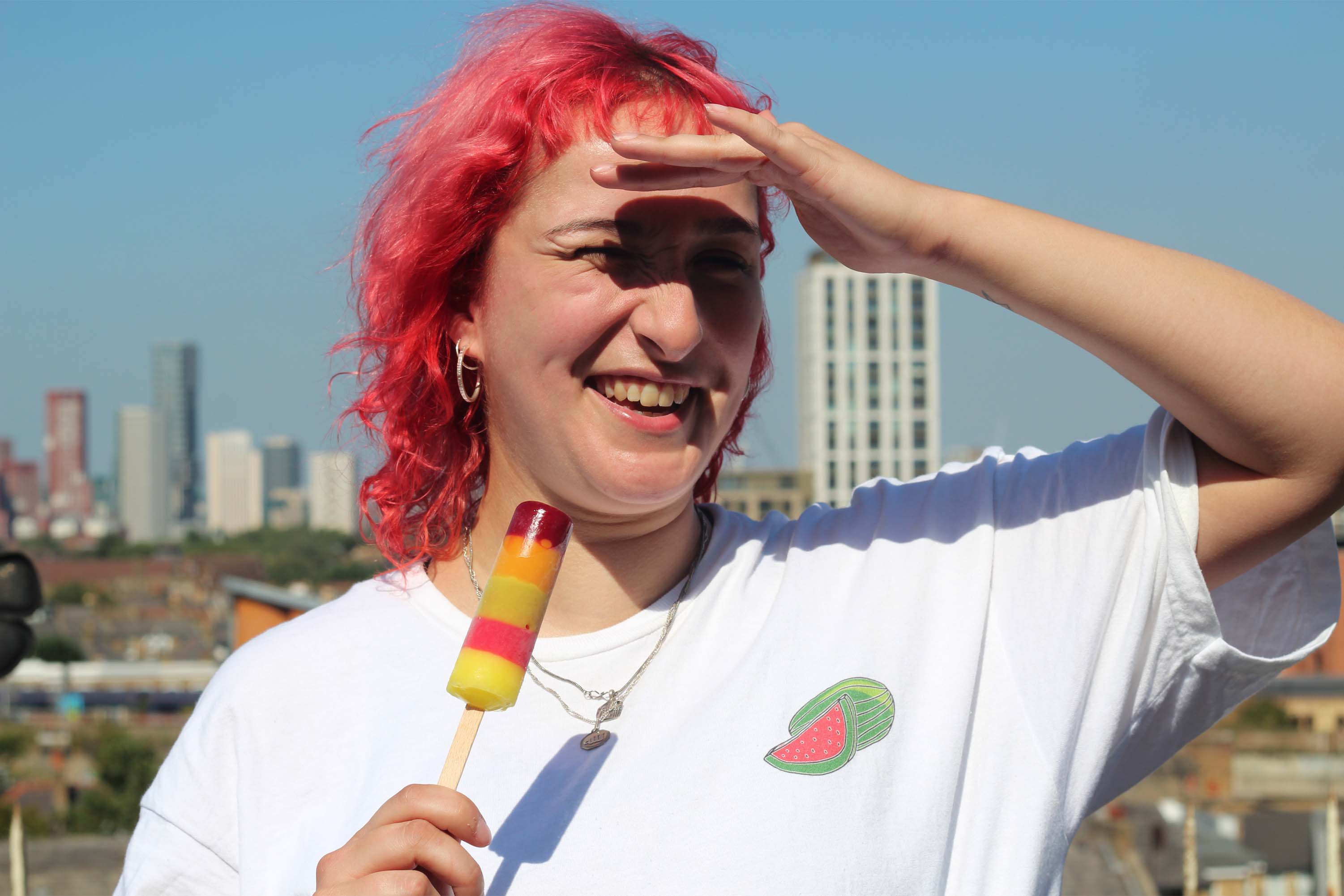 What item of clothing or accessory, that you think makes your outfit?

I have these two necklaces, one which says Allah and then another one it’s kind of a fan thing. These were given to me by my Moroccan family, as I mentioned before my mum’s Polish, my dad's Moroccan, so that was a whole thing. I feel like growing up as a mixed race but clearly very white passing person, particularly in the UK, I just feel quite separated from my Moroccan side quite a lot. Also all of my Polish family are here, just because they moved during the war, but all of my Moroccan family stayed in Morocco. I feel much more separate from them and these necklaces, I only found them recently, they were given to me by my two aunties Fatima and Hakima when I was born, so it was very common that all my relatives would bring a piece of jewellery, so I have another one that says Sofia in arabic. These two are something that’s sentimental but cute and nice. I think as well with islam, there’s so many misconceptions about Islam in the UK, and I think just wearing this kind of allows me to form my own connections with it, even though I was christened, I grew up in a multi faith household, and we used to do like ramadan and stuff.

Who is your top style icon?

Is it cringe to say my grandma? Because I wear so many of my nan’s clothes and coincidentally, she always supports my T-shirts, she literally loves getting them. Her wardrobe is obviously like loads of vintage granny clothes and then the odd streetwear thing. She gives me a lot of hand-me-downs, a lot of quite nice blouses and shirts that I like to style in a different way, I like to wear it open with a crop top maybe, a lil cute something. Yeah, I would probably say my nan, but failing that, I would say Leigh Bowery who is a performance artist/queer icon from back in the day, I’d definitely recommend checking out Leigh Bowery’s outfits. Very audacious and very colourful and I think that sort of stuff just inspires me so much more to take risks with fashion, even though I’m not coming out here in the exact stuff he would wear I still try to embody that, and be more free with it and have a bit of fun with it more than I used to when I was younger.
Big ups to SofieK for coming down, she was a pleasure to chat with and learn from and big thanks to her for choosing to make such an important piece of merch for an important cause with us, which you can cop here.
‍
– Rachel & The KH Team
Transcribed by Xae
Photography by Rachel
Posted on 16th September 2021